Areola & Nipple Tattooing Is For Everyone 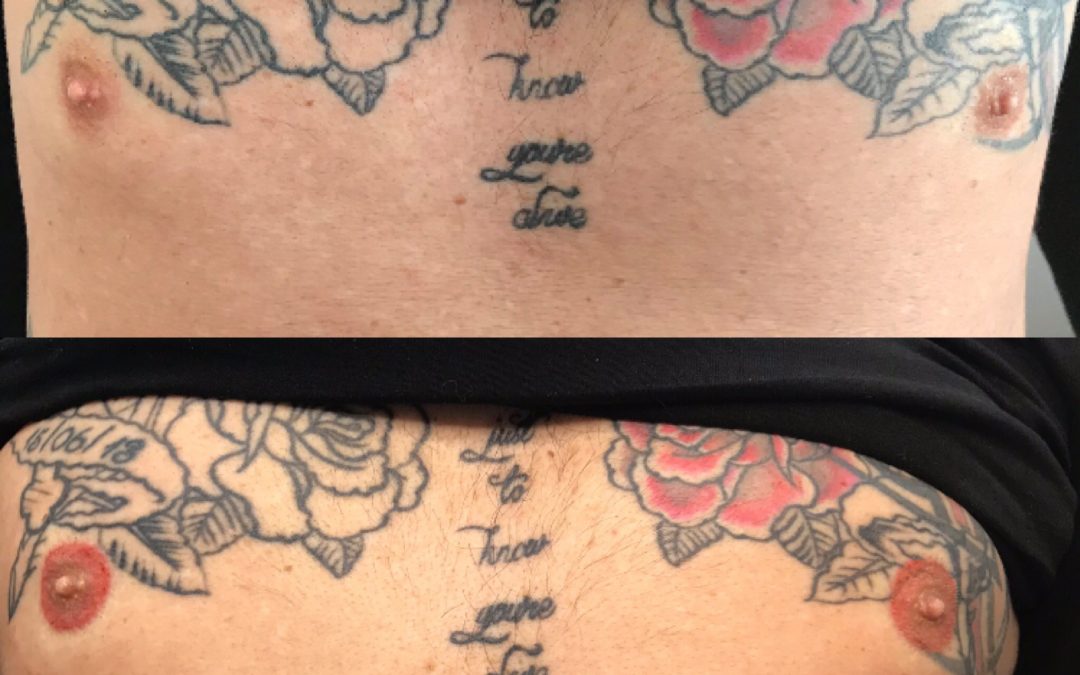 Understandably, when people hear the words ‘nipple and areola tattooing’, they think of female breast cancer survivors. It may surprise many to learn that nipple and areola tattooing can be performed on clients for several reasons besides post cancer treatments.
Kev With Small Nipples
My good friend and fellow cosmetic tattooist Kev was kind enough to visit DPC Clinic to tattoo my [G]eyeliner and the hairline of my scalp in return for me tattooing his areola! This was such an interesting request to me and I excitedly agreed. Background: Kev is a tall guy and is slim with a fairly broad frame. As a result of this physique Kev’s nipples, it could be said – look ‘undersized’. 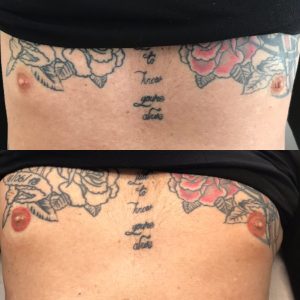 Between Kev and I, we designed using a makeup pencil what size the areola should be increased to. I then chose three tattoo pigments to match the detail of Kev’s natural nipple colour and began tattooing the 3D illusion nipple edges and areola until we were both delighted with the appearance.
Transgender Breasts
I wish I could remember how long ‘Doll’ and I have been ‘instagram friends’. She had transitioned from male to female and I was privileged to have tattooed her eyebrows as part of her journey. Being aware that I tattooed nipples and areola, Doll enquired. She considered her nipples far too small. By her own admission Doll’s breast enhancement surgery resulted in “very realistic boobs but because they’re so big – my nipples are too small”. 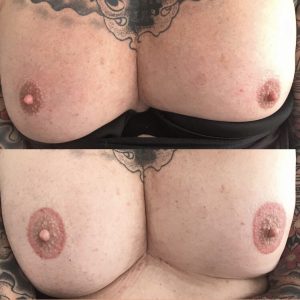 As with Kev, I could appreciate that aesthetically the nipples could be considered disproportionately small. Similarly to Kev’s appointment; I had the task of measuring and drawing the new sized areola. Then I selected pigments which would match the existing nipples and then I started tattooing to offer the illusion of the nipples being bigger. For Doll, unlike Kev – I included more detail akin to women’s breasts such as ‘strawberry glands’ (the small circular lumps on female nipples).
Andy With Vitiligo
Another interesting client consultation was this man who visited me to discuss his vitiligo* and what solution/s I could offer.
*Vitiligo: vitiligo is a long-term skin condition characterized by patches of the skin losing their pigment. The patches of skin affected become white and usually have sharp margins. The hair from the skin may also become white. The inside of the mouth and nose may also be involved. Typically both sides of the body are affected. Often the patches begin on areas of skin that are exposed to the sun. It is more noticeable in people with dark skin. Vitiligo may result in psychological stress and those affected may be stigmatised!
This man’s nipples had two inconsistent pigmentation shapes. It seemed unusual to me that someone would only have vitiligo concentrated on two nipples and not elsewhere on his body but, thankfully the two nipples were the only affected areas. I explained that, whilst I hadn’t performed this procedure before I was willing to. I am experienced and confident enough to at least attempt to resolve issues for clients.
Andy used a topical numbing cream to self apply to his nipples an hour before arriving at his appointment with me. Once we had completed the relevant consultation paperwork and determined which colour tattoo pigment would camouflage his vitiligo, we began… 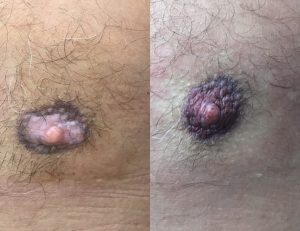 Andy professed himself comfortable throughout his one hour treatment. Both regarding the skin being comfortable whilst tattooing as well as Andy needing to remain topless I (as I always will), I ensured that the room’s temperature was ambient and it’s door locked.
Once complete, Andy was given his soothing aftercare balm to apply as-and-when he felt he needed. I am proud to say that we were both extremely pleased with the results (which you see below).
So, whether you are a man or a woman who has have received a mastectomy or perhaps suffered scarring by other means, or maybe you just want aesthetic improvements (colour strength or size or detail) to your nipple and areola, please do enquire to discuss it. Our beautiful but welcoming clinic is private and discreet.
Book your free consultation now either by 📲 07496 301199 or 💻 https://www.dpcclinic.co.uk/book-now/
By Phil Davis, Lead Cosmetic Tattooist, DPC Clinic