Tattoos – Who when where but WHY?

The oldest discovery of tattooed human skin to date was found on the body of Ötzi the iceman. Ancient stone aged people such as Ötzi the iceman are thought have been tattooed or tattooed themselves on their joints as they believed it could help fix or soothe rheumatism & arthritic ailments. Ötzi, discovered frozen in a glacier in 1991 had died and was preserved for 5300yrs before his sixty-one tattoos were mapped!

Other tattooed mummies have been recovered from at least 49 archaeological sites including locations in Greenland, Alaska, Siberia, Mongolia, western China, Egypt, Sudan, the Philippines, and the Andes.

Tattooing was often a status symbol in ancient times, reserved for decorative purposes for royalty such as Priestess of the Goddess Hathor from ancient Egypt (c. 2134-1991 BC). Not content with jewellery, high society would decorate their bodies or receive a tattoo for protection, such was their belief in the spirit world:

Tattoos are more common nowadays.. why?
Ready availability means that there exists a huge demand for tattoos. Since the turn of the century, society has witnessed a surge in tattooing. It is not at all uncommon now for people to have ‘some ink’. From the Chinese symbol to the ‘tramp stamp’ to personalised Sanskrit messages to sleeves, we all know somebody who has branded themselves.

But why? Well, tattoos like many aspects of fashion (shoes, haircuts, makeup) are a statement. Many people mark the birth of their baby with the date or the child’s name. Some record the death of a loved one with tattooing. 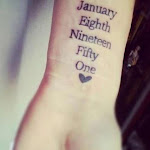 People naturally seek comfort, we all do whether we are conscious of it or not. Carrying a personalised message that communicates outwardly it makes us feel safe, proud, lucky or brave is something which brings inspiration and pleasure to those with their tattoo.

The rise of permanent makeup which, lest we forget is also a tattoo as we implant the pigments in to the dermal layer (see my previous blog about tatto ink v permanent makeup pigments) is very much a tattoo for everyone and is increasingly popular across the social spectrum for both male and female clients. The lady pictured above is my wife, Penny. The photo is not only illustrating Penny’s important body art Tattoo message, she also has her brows, eyeliner and lips tattooed. Enhancing features is a relatively modern body modification and is an increasingly popular remedy to removable makeup. Here at DPC we offer a full range of permanent makeup from eyebrows, eyeliner and even lips and if you would like any more information on any of our services, just get in touch as we offer compliementary consultations.